Do The Damn Thing: Getting Comfortable Being Uncomfortable with Dominique Farrar [Video]

What’s holding you back from being the best you can be?

Is fear slowing you down?

During this week’s episode of Do The Damn Thing, Alexxa Farrar has a chat with Dominique, the co-founder of HipCat Society.

Dominique explains what you need to do to conquer your fears and get comfortable with the uncomfortable.

But what does that mean?

Be sure to watch our video now to find out how he does the damn thing!

Alexxa: I like what you’re saying there, so let’s just get going with it.

Dominique: You’re always going to be kind of right here, floating. And then you can always go higher. You can always go lower. And there’s always going to be that uncomfortable feeling when you want to grow. Everyone faces it, whether you’re doing a basic job because it’s your first job or you’re running a million-dollar company. There’s always that level of growth, awareness, and kind of discipline that you have to take yourself up from.

I think the thing that has slowed me down is resisting the uncomfortable part of it and resisting it or feeling like it shouldn’t be that way, or this should be easier. I should be further along. And that is almost the part that holds you back.

I just try and look at it as a game. Instead of something coming at me and it’s just this horrible, hard thing. It’s like, “Okay, my body or the universe, or whatever, is throwing something in my way. How are we going to go about it?”

Dominique: That’s exactly it. That’s detachment. I heard this from one guy a while back, and it stuck with me. He was able to push through with the aid of perspective and gratitude. What you just said is about perspective.

When you’re experiencing tunnel vision in your own problems in life, then you can’t take it as a game. But when you get a bigger perspective, you start seeing a lot of moving pieces. There’s a bigger picture. You’re always kind of safe. You’re always okay in the end.

And then you can come out of it more like a game. You’re detached. You’re still fully aware of everything, trying to solve problems, but you’re detached from it.

Alexxa: When you’re not in the mental state of despair and stress, then you’re obviously going to perform how you’re supposed to or how you want to.

There’s always going to be a bigger problem. Problems don’t get smaller. They get bigger.

Then you also just feel more confident. I don’t know how many times I’ve built something up in my head. “It’s going to be horrible! It’s too hard.” And then it takes five minutes to do. And then you’re just so much more confident, and you’re like, “Why was I beating myself up so hard about it?”

So many things in life apply to that. Whether it’s a ticket that I got to go pay or a task that I got to do, I just get it done because the rest of it is just a crap show.

When you feel negative, just shut your mind off. Just don’t even go there. And it takes trust. Instinct tells you, “Oh, there’s a problem. I got to look at it. I have to solve it. I have to stare down this problem until it goes away. But, in reality, it only makes it bigger.

So, just trust in your gut. Try staying away from thoughts that feel like that. Keep building yourself up and tackling it one little piece at a time. And like you said, you build your confidence.

Alexxa: Give me an example of a time when you were like, “Oh my God, no!” And how did you overcome it?

Dominique: Honestly, it’s almost every day. I’ll deal with the same thing from six months ago, a year ago. And the way I deal with it: meditation. It’s obviously always going to be a winner because the main thing is your mind. That’s the cause of your stress overload. So if you can consciously shut your mind off, the solutions will start to come.

Where it’s getting comfortable in the uncomfortable is just knowing: that’s the process and trusting that process more and more. I can’t tell you how many times it’s worked out for me, but I still have to get myself to trust that process and know that the solution is going to come.

And then you start to get more conscious and deliberate in the process of how you handle it instead of just going into overwhelm and bingeing on Netflix. I’m just going to sit down and meditate on it.

Alexxa: I definitely have to practice awareness. You have to be aware to be able to change what perception you’re coming from. You have to see where you’re at to be able to adjust. If we can stay aware ware of what was going on realistically, then it would be a lot easier.

One thing that I really like thinking about is our eyesight. You can see a lot in your peripheral. But what you can focus in on is a very small space. That, mixed with attention spans and all the distractions – we’re fighting a war here. You got a small awareness space, and you got a lot of stuff going on. You have to fight to keep that awareness.

Dominique: That’s why everyone just talks about how dangerous social media is, from that standpoint. It just sucks up your attention. Your association is important because you’re setting yourself up for success. Because we’re humans, we’re not going to be able to maintain awareness one hundred percent of the time. You set yourself up for success by choosing what you’re taking in.

Alexxa: What are your top tips for staying aware?

Dominique: Reading helps and what you’re intaking. Your morning routine should be solid. If you can get ahead of the ball, then it’s a lot lighter throughout the day. I think just paying attention to your gut – all the time – and paying attention to your body. You’ll notice that you start to tense up from your stomach whenever something comes up. You just use that as a trigger.

I was in a meeting this morning. Something came up, and I just noticed my gut tensed up a little bit in my solar plexus. I just stayed aware of it and let it go. I consciously detached from what was going on. And then you’re able to kind of think about everything from a cooler head.

Dominique: A lot of times, they’re BS. And when you really think them through, you realize that you’re tripping over nothing.

Alexxa: It’s crazy how much your mind produces BS? A lot of it is a bunch of BS. It could be anything from your past that’s coming up and just firing a thought from when you were young. And it’s like, why? So I’m like, “Okay, well, where’s this coming from?” Most of the time, it is from the past, or some random thought just spit firing.

I feel like it’s easier for you to put things in boxes and for you to detach from things. And so, what tips do you have for the more emotional people to be able to detach – and stay away from themselves from a higher perspective – instead of just being zoned into everything being horrible?

Dominique: My advice would be to make that your strength and tune in deeper to your emotions. If you can pay more attention to how you feel earlier, you won’t take yourself down that path. Anytime you feel like that: it’s been building up. Anytime you feel that overwhelm – that despair, that stress – it’s not just one thought that you had in that one moment. It’s been a momentum of ways of thinking. And then things happen, and that’s already kind of the perspective you’re in.

That’s why gratitude is so powerful as kind of the quickest way to just put yourself into that. And build on that momentum. Always pay attention. What am I thinking? How am I feeling? That’s what’s going to give you the motivation and what’s going to give you the power. It can be more of a blessing than anything to have that – if you kind of ride the horse the right way, instead of letting it buck you.

Alexxa: They say that it takes 90 seconds to process an emotion. So we have to remember that it is a choice. If someone runs you off the road and you’re still thinking about it at dinner, you’re choosing to let it get to you that whole day.

Dominique: If you think a thought pattern for 17 seconds, it builds momentum. And one thought kind of leads to another thought. So if you think that thought pattern for 17 seconds, it’s going to lead to more thoughts that are similar in nature. So anything under 17, if you cut it, you cut the momentum. So it’s kind of your choice. That’s the gap. It’s like a 15-second gap of awareness.

Alexxa: Anything else. Any other advice?

Dominique: Just keep your focus on where you’re trying to go. If it’s your goal to build your business or grow your brand, just always keep in mind what you want that to look like.

Alexxa: Awesome. Well, thank you for joining us. We enjoyed having you.

Alexxa: Just do the damn thing. Don’t let the fear hold you back. Let’s be real clear. 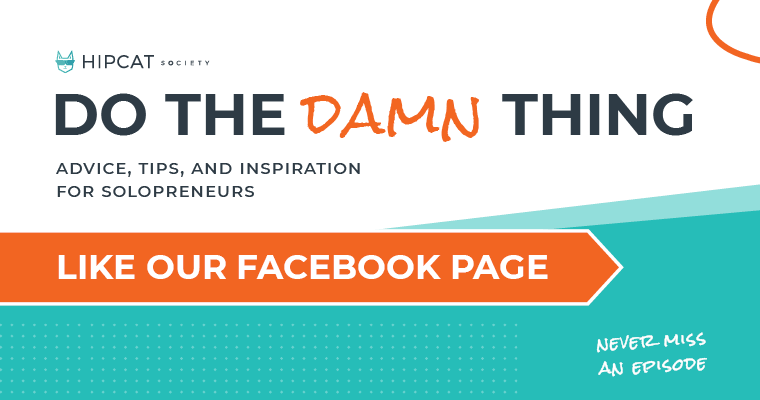